In a life filled with an endless progression of small pets, the thing I yearned for throughout my life was a dog. When I was a child, we had a little bulldog pug mix named Lola, who attached herself to me in the gardens, and with whom I had tea parties. Then we had a huge black poodle named Den, who frankly scared me. Still, I have always loved dogs. I had cats, though, and loved them dearly. I traveled frequently on business, and was in and out of the country. I knew that while cats did well with a pet sitter in my flat, a dog was out of the question with me gone so much.

When I settled down and got married, I expected to get a dog but discovered that the man I married had no intention of adding a dog into the equation. We had a succession of hamsters and gerbils that seemed interchangeable since the kids tended to name them the same thing and not notice when movement in the cage ceased.Their little bodies couldn’t maintain a long life span. We had ferrets (rescued from neglect), guinea pigs (some of whom did not turn out to be the same gender, and thus increased their number), chinchillas, and goldfish.  The goldfish didn’t do well when my son Ian kept feeding them Dorito chips in the misapprehension that if he liked them, they would like them.

They joined us because there have been almost no animals in my life that I didn’t welcome. I got a reputation in town as the animal rescuer, the kitten foster, the dog foster, the wildlife rehabilitator, even (during my years with the Seal Rescue Clinic) a seal rescuer, and ultimately, and much later, the dog whisperer. And over time, many things showed up at my house in a variety of cardboard boxes. They didn’t quite fit the dog shaped void that existed in my heart.

My husband and I negotiated a lot. He told me to get rid of 4 cats and that would equal one dog. As if I would voluntarily give up a small animal to whom I’d made a commitment. Then he pointed out that we should wait until we didn’t have really small children. Since I had five children, this was going to take a while. Fourteen years and one divorce later, I moved into a house of my own with no one to answer to or negotiate with, and children more than happy to welcome a dog.

So the first thing I did was get a Pembroke Welsh Corgi puppy from a reputable local breeder. I named her Calypso, after Jacque Cousteau’s research vessel. She’s a sweet ball of long ginger fluff, and for me it was love at first sight.  Our first spring and summer together, the days would begin at dawn. She and I would go out to the back lawn so she could pee and then we would sit on the back deck and listen to the sounds of early morning. I would have one arm around her, my hand gently kneading her fur. Her chin would be resting on my leg. I was filled with utter contentment as we watched the sun rise and listened to the birds waking. She was everything I had imagined a dog would be. To this day, she soaks up attention and love. She’s turned into a bossy little herder. 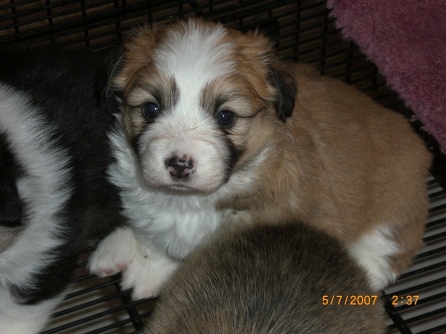 There have been and still are cats that I adore, whose company I cherish, whose warm bodies rest against mine each night like a purring patchwork quilt, but our relationship is different than the one I have with my dogs.  They seem to like me, they seek out my company, and yet…I don’t get the sense that I am vital to them. I don’t get the sense, the way I do with my dogs, that if something happened to me they would mourn me for too long, since someone else could open a can.

I feel needed by Calypso; I feel special and vital and central to her. And to Faolan, the Great Pyrenees I rescued a year later. And somewhere along the line the feelings became mutual and I realize that they were my best friends, and when the day came that I lost either to the heart breaking reality of the short life span of a dog, I would be missing a piece of myself. A chunk of my heart. A major limb.

When I was working in an emergency veterinary hospital and clients would face the death of an animal, often I would hear, “I can’t ever do this again. I couldn’t bear it. I’ll never get another dog.” The loss is indeed unbearable, losing a family member. I completely disdain the lack of understanding in people who say, ”It’s just a dog.” There is no such thing as “just a dog”. Dogs are adopted siblings, children, best friends, soul mates, guardians. Indispensable and infinitely precious.

The following year after Faolan came, we adopted Finian, another Great Pyrenees. By that time, I was fostering for the National Great Pyrenees Rescue, and anyone who fosters knows that it’s not always easy to send off one of one’s babies, even to a good home. Sometimes we fall in love. 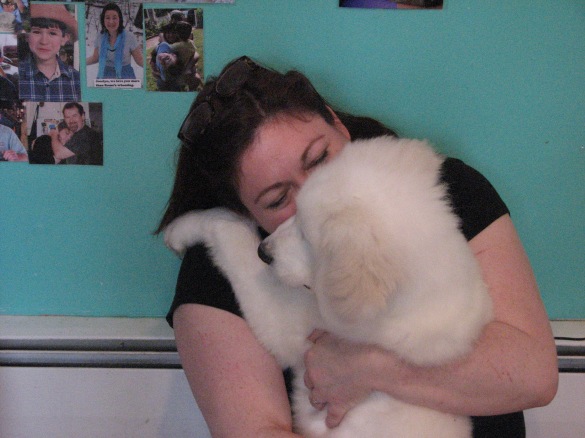 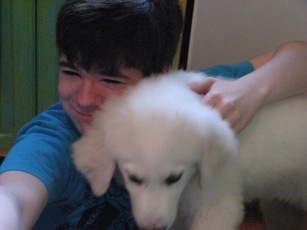 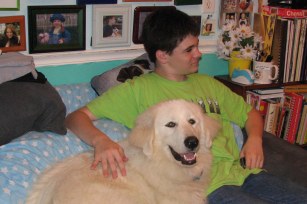 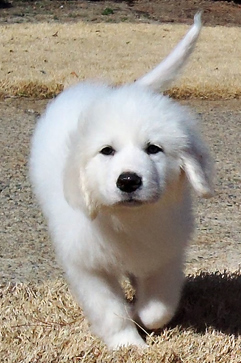 A year later, we brought Isabelle home for fostering. She was a small black puppy, a Great Pyrenees mix, who looked like a little bear cub. On the ride back from the place where I met the Great Pyr volunteer for transport, I held Isabelle while my (new) husband drove. She fell asleep, burrowing her little muzzle into the side of my neck, her body draped loosely in my arms. She was another one who wasn’t going anywhere. 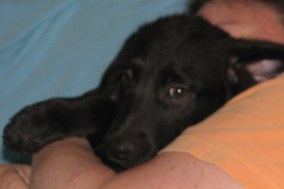 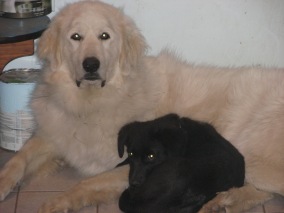 Faolan and Finian, as are most Great Pyrenees, were our guardians. Each evening they would do a last patrol of the property, alert for intruders, danger, aggressive squirrels. They flanked me when I walked, and slept beside me when I relaxed.

Over the years, we lost our Faolan to renal failure, and then our Finian almost exactly a year later, from the same issue. Their origin in the South, without proper care, probably one of an ignored and unwanted litter in someone’s backyard, gave them a poor start. They had worms, not uncommon in puppies, but also had probably contracted uncaught lyme which began the slow destruction of their organs, a problem we didn’t catch until years later, far too late. They were each with us 7 years, and when the time came, each time, I lay beside my gentle Pyr on the blanket, as he gently went to sleep, and did not wake again. My heart broke, shattered into small pieces, with a Great Pyrenees sized hole in my heart that, years later, has not fully healed.

Isabelle and Calypso were my lifeline, their love steadfast. Calypso is my firstborn in our dog world, and Isabelle our guardian. New people will come to the house, and Isabelle sounds the alarm, her Great Pyrenees bark a clarion call to possible intruders. Calypso will then start barking, as if to say, I have no idea what’s going on, but I’m with you!

A couple of years later, Foxy came into our lives. She was also a rescue, a shy and very old little Pomeranian, with soft ginger fur and a foxy face. I adored her, and she went everywhere with me when I did humane education programs. She was my little ambassador, along with my white Angora rabbit, Daphne, who would drape over people like a small fuzzy blanket, and my cranky little hedgehog O’Malley. She was only with us for three years before her health failed. I still miss her, and feel blessed that she was able to be part of our family, however brief that seemed. 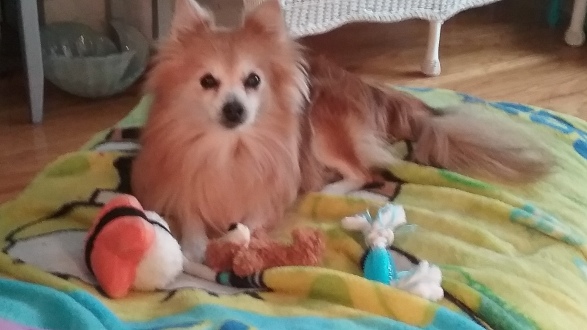 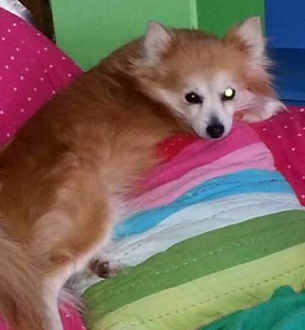 A couple of years ago, I rescued two Morkies when their owner could no longer keep them. Benny and Bailey are siblings, and when they’re relaxed, they curl up into a single ball, one almost indistinguishable from the other. They’re both rather tiny, with silky grey and blond hair, and have a ridiculous number of sweaters. 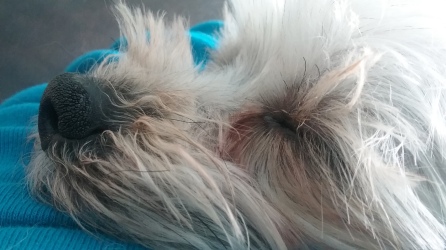 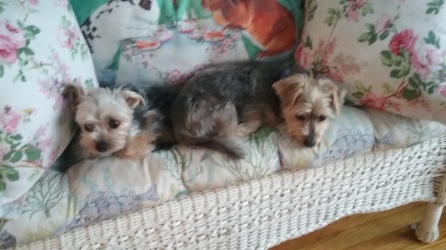 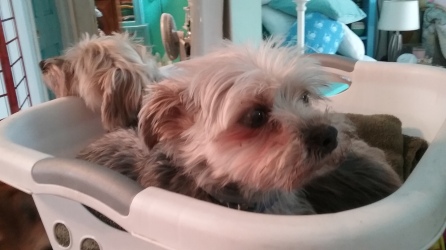 These dogs are family. I continue to marvel at the level of love and loyalty with which dogs gift us. Indeed, the dogs themselves have been a gift, enriching our lives and widening our hearts. When I’m happy, they join in by prancing and woofing gently. When I’m sad, I can count on their comforting presence, the touch of a paw as one of them reaches out to me, the soft sigh beside me. They are never “just dogs”.